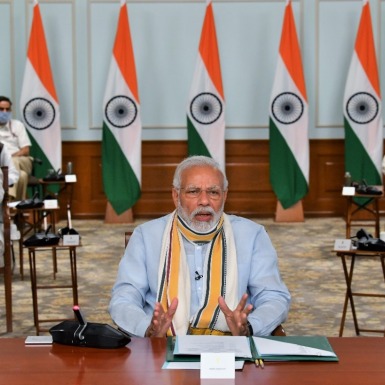 This is the third post in the series of three posts on federalism after Covid. Find the first and second posts here and here.

The Indian Constitution was never envisioned to tackle a cataclysmic global pandemic, like the COVID-19. Part XVIII of our Constitution (emergency provisions) does not provide the appropriate framework suitable for the COVID-19 crisis. While there has been no formal declaration of emergency, under which centralization of powers in the hands of the Union government is permissible, there exists a de-facto state of emergency. Responding to the pandemic, the Union government took charge of our entire governance structure, at both national and regional level. While this may not be the time to be pessimistic in examining government actions, our sense of being protected should not dissuade us from considering certain fundamental questions of constitutional significance.

In this post, I shall explore how India’s Centre-State relationships have been working out, during this state of de-facto emergency. I would closely analyse the strength of the “national importance” justification, which is being used by the Union government to temporarily remodel our constitutional scheme. The remodelling lies in the fact that, even without resorting to the constitutional emergency powers, there is an ongoing centralisation of rule-making authority. To adopt emergency powers de-facto, and then offering a post-facto situational justification might dilute the rule of law.

As we know, the instrument of a ‘lockdown’ has been resorted to by the Union government to prevent community spread of the virus. Interestingly, the Ministry of Home Affairs (“MHA”) invoked the broadly worded Disaster Management Act, 2005 (“DMA”) to issue the lockdown guidelines (see here & here), which were to be mandatorily implemented by the States. On 1 April, in a letter addressed to the State Chief Secretaries, MHA had “observed that some States are allowing exceptions beyond what has been permitted” under the MHA guidelines and directed the States to “strictly implement lockdown measures in letter and spirit”.

The power of the Union to issue binding directions to States is primarily sourced from Article 256. The preconditions for its applicability are – first, the existence of a central law applicable to the State [T.P. George(1992)], second, the directive issued by the Union must be in relation to a matter covered by a central law [Sharma Transport(2001)], third, the directive must be issued to ensure compliance with the central law.

Under our constitutional scheme, the States are bound to implement directions from the Union government. The special bench decision of the Calcutta High Court in Jay Engineering Works Ltd., popularly known as the “gherao” case, had also opined on this issue. In the context of the authority of the State government to issue orders for the management of state administration, the court had held-

Presently, the MHA orders, issued pursuant to the DMA, is in nature of a ‘directive’ calling for strict compliance with the lockdown guidelines. However, imagine a situation wherein a State refuses to follow the MHA guidelines. Under the Constitution, refusal to follow a Union directive can lead to the invocation of Article 365, which allows the President (acting under aid and advice of the Union Cabinet) to enforce the Union directives by declaring President’s rule under Article 356.[1] This issue has somehow always escaped serious judicial scrutiny. In this context, some guidance maybe found in the separate opinion of Justices Jeevan Reddy and Agrawal in S.R. Bommai (1994). While reading Articles 256, 365 and 356 together, they held that non-compliance with a Union Directive may lead to the imposition of Presidential Rule only when:

In this post, I shall only address the first condition i.e. the directive must be lawful and constitutionally valid. For example, if the guidelines substantially encroach upon the exclusive legislative domain of the States i.e. matters under List II of Schedule VII; or they are prima facie inconsistent with Part III. The question then is – do the States have an option to express dissent and refuse implementation of such directives, which in their opinion are not “lawful”? Or COVID-19 being a matter of “national importance” justifies the actions of the Union? Let us consider both the above possibilities in seriatim.

If a Direction encroaches upon the exclusive domain of States?

With regard to federal division of power, India subscribed to the “regulatory and interventionist model”, which outlines that the Union and States operate in their own exclusive legislative domains and any interference from the Union government is prohibited, unless expressly provided in the Constitution (M.P. Singh). In the context of the applicability of Article 256, a 3-judge bench of the Supreme Court in Sharma Transport (2001) had held that:

“The expression ‘for that purpose’ in Article 256 refers to the requirement of compliance with the laws made by Parliament…..It has to be noted that Entry 56 of List II of the Seventh Schedule deals with passengers and the Union has no power to levy taxes in respect of passengers.” [Emphasis added]

Therefore, the Supreme Court has clarified that the power under Article 256 can only be exercised for matters falling within the legislative mandate of the Union. Now, let us consider the relevant entries of Schedule VII that had a role to play during the lockdown:

It’s noteworthy that the National Disaster Management Authority itself noted that the subject of “disaster management” is not expressly covered by any of the Lists in Schedule VII. Interestingly, the DMA was legislated under Entry 23 of the Concurrent List, which is quite general in character. Moreover, it is well settled that the subject-matter of a ‘general entry’ must be interpreted to exclude that of the ‘specific entry’ [Waverly Jute Mills v. Raymon(1962)] and therefore, the former cannot subsume the latter.

Surprisingly, the MHA lockdown guidelines addressed every minute aspect of regional governance, such as a limit of twenty persons for the congregation for funerals, or the prohibition on all gatherings for sports and entertainment purposes, without any exception. In my opinion, notwithstanding the necessity of the restrictions, these may not have been matters warranting interference from the Union government. These guidelines seem to be transgressing into the domains of “Public order”, “Police” and “Sports & entertainment”, which are matters under the State List.

Now, to tackle the “national importance” justification in this regard, reliance must be placed on Justice Nariman’s judgement in Jayant Verma v. UOI(2018). At paras 36-38, the court held-

“The argument, therefore, that Section 21A is made by Parliament at the national level and is of national importance and must, therefore, prevail over State legislation made within the exclusive subject matters of List II, would again fall foul of the constitutional scheme, in that all the entries of List II would then be subject to Parliamentary law, which is of national importance” [Emphasis added]

Therefore, the national nature of COVID-19 may not be a sufficient constitutional justification for the Centre to assume paramountcy. Herein, I endeavour to only highlight certain instances of potential conflict of ‘competence’ between the Union and States. The question of the encroachments being ‘incidental’ or ‘intentional and expressed’, or the use of DMA being colourable is to be examined on a case-to-case basis.[3] But the States ought to be able to modify certain Union directives, if the relevant matters exclusively fall under the State List.

If a Direction is prima facie inconsistent with Part III?

In my opinion, States are not obliged to implement any Union directive, if the directive or the law pursuant to which it was issued, is violative of a Part III right. If the Parliament or the Union executive under Article 73, did not have the power to make such laws/issue directives in the first place, by virtue of Article 13, then it cannot use the command of Article 256 to force States to implement them. It is well settled that a constitutional functionary cannot do something indirectly, which it cannot do directly. Furthermore, the COVID-19 crisis cannot justify derogation from Part III, unless the enforcement of the rights were suspended by the declaration of an emergency.

A similar question came up for consideration before a 5-judge bench of the Gujarat High Court in Adam B Chaki,[4] while examining the validity of a Central pre-matric scholarship scheme for students belonging to certain religious-minority communities. Therein, a prayer was made for issuance of a writ of mandamus to the State for implementation of the scheme. While the majority refused to go into the larger question of Centre-State relations, the minority judgement (of 2 judges) held that –

“The Scheme violates Article 15(1) and any direction upon the State Government for its implementation would amount to passing a direction to violate Part III.” [Emphasis added]

As Bhatia had rightly articulated – “While the majority opinion lays down the law, a dissent allows us to imagine an alternative future.” Thus, taking inspiration from the above rationale, I argue that the States may refuse implementation of a direction, citing its ‘prima facie inconsistency’ with Part III. For purposes of illustration – imagine if the MHA guidelines had allowed one religious community to visit its place of worship, but didn’t extend the same freedom to others. I agree that would be an ‘easy case’ of inconsistency and in reality the problems are much more subtle and complex. The difficulty lies in resolving those ‘hard cases’ wherein multiple views about the validity of a directive is possible. Moreover, in times of crisis, when an immediate response is necessary, the States may not always have the choice or time to approach the constitutional courts, especially while staring down the barrel of a Presidential Rule, under Article 356. However, technically a prayer for an interim injunction can be made, during the pendency of the constitutional challenge.

Within our constitutional scheme, the Union is not ‘sovereign’ and its power to ensure compliance with central laws is sourced and limited by the Constitution.[5] Interestingly, our Constitution did not subscribe to any set political model, like ‘quasi-federal’ or ‘unitary’ or ‘statutory decentralisation’. As Austin noted, India created its indigenous federal system, reflecting the idea of “cooperative federalism”.[6] In such a system, the notion of constitutional trust between Centre and States becomes crucial [Justice Misra in NCT of Delhi v. UOI (2018)]. I believe the said study of the relationship between federal units and their respective sphere of operations becomes especially relevant during a crisis, as the temptation to overreach and abuse can possibly cloud one’s good sense. I shall conclude with the prophetic words of Lord Denning in “Freedom under the law” (part of Hamlyn Lecture series)[7]–

“an official who is the possessor of that power often does not realise when he is abusing it. Its influence is so insidious that he may be believing that he is acting for the public good when, in truth all he is doing is to assert his own brief authority. The Jack-in-office never realises that he is being a little tyrant.”

[3] Space does not permit a detailed analysis of the relevant concepts and doctrines in this regard. However, for an illuminating analysis of the concepts of ‘competence’ and ‘repugnance’, See  Niranjan, V., Legislative Competence: The Union and the States, The Oxford Handbook of the Indian Constitution (2016, Oxford University Press).

[5] For a detailed discussion on the subject of “Supremacy of Constitution”, please see Separation opinion of Justice Dipak Misra in Kalpana Mehta (2018).

[7] T. E. L., Freedom Under the Law. The Hamlyn Lectures. First Series. By the Right Honourable Sir Alfred Denning, one of the Lords Justices of His Majesty’s Court of Appeal in England. [London: Stevens & Sons, Ltd.1949], (Ch. 4: The Powers of the Executive, at page 99).

Anubhav is a 2020 graduate from the Jindal Global Law School, and will soon be joining the Banking and Finance team of Khaitan & Co.

5 thoughts on “Federalism and Covid-19: Analysing the “National Importance” Justification of the Centre”