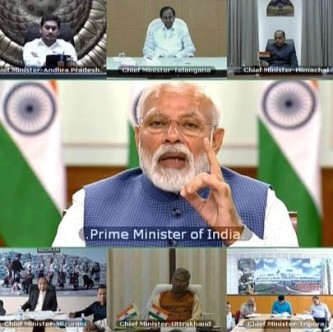 This is Theme 1/ Week 1 of the webinar series and blog symposium – organized by the student wing of the Vidhi Centre for Legal Policy, the Kautilya Society, in partnership with the Young Scholars Initiative.

8th August (Saturday): Three Articles on the three topics, authored by the Batch of 2020 graduates of India’s foremost law schools, will be released as part of our blog symposium on lawschoolpolicyreview.com.

9th August (Sunday) : A webinar will be held from 14:30-16:30 IST, hosted by two domain experts from the field of law and policy-making, who shall discuss the written posts and navigate the otherwise vast ambit of this theme.. The speakers will be speaking for 1 hour, followed by a 45-minute QnA session.

This theme will look at Indian Federalism after Covid in terms of three broad topics:

Under Fiscal Federalism – the panellists will examine how revenue shortages have affected the states’ capacity to deal with the pandemic, and how the Centre owes them a responsibility in this regard. The key issue is that even though public health is the exclusive domain of states they are grossly underfunded to deal with the same.

Under Centre-State Coordination –  the panellists will look at the relationship and responsibilities shared between the centre and the states to answer questions such as: Can States have their own sui generis apparatus in lifting lockdowns based on their own understanding of the needs of their state, while ignoring the Union’s call to kickstart the economy? Should they be allowed to refuse flight services in their states from operating, when central govt. forces them to start their airports?

And, under Cooperative Federalism – the panellists look at the cooperation required between states while enforcing the lockdown; could developed states allow people coming from neighbouring states to access their superior healthcare infrastructure, while also sealing their borders? How would this workout within India’s federal setup?

Mr Alok Prasanna Kumar is Co-Founder and Lead at the Vidhi Centre for Legal Policy. His areas of research include judicial reforms, Constitutional law, urban development, and law and technology. He writes a monthly column for the Economic and Political Weekly and has published in the Indian Journal of Constitutional Law and National Law School of India Review apart from media outlets such as The Hindu, Indian Express, Scroll, Quint and Caravan. He has practiced in the Supreme Court and Delhi High Court from the chambers of Mr Mohan Parasaran, and currently also co-hosts the Ganatantra podcast on IVM Podcasts.

Dr Amal Sethi is a Fellow at the University of Pennsylvania where he researches on comparative constitutional law and theory with an emphasis on courts, constitutions and democracy. He has been involved with different governmental and inter-governmental agencies ranging from USAID and the US Department of Commerce to the UNESCO, UNDP, UN Women, UNHCHR, and The SDG Fund. He has advised sovereign governments on constitution-making and at international tribunals such as the International Court of Justice.

Fiscal Federalism by Tejas Popat: Even though public health is the exclusive domain of states they are grossly underfunded to deal with the same. What responsibilities are owed by the centre to the states in such a scenario?

Tejas is a 2020 graduate from NUJS Kolkata with a keen interest in constitutional law. He is going to join a litigation firm primarily practising at the Bombay High Court.

Centre-state Coordination by Anubhav Khamroi: Can States have their own sui generis apparatus in lifting lockdowns based on their own understanding of the needs of their state, while ignoring the Union’s call to kickstart the economy?

Anubhav is a 2020 graduate from the Jindal Global Law School, and will soon be joining the Banking and Finance team of Khaitan & Co.

Co-operative Federalism by Ragini Agarwal: Cooperation is required between states while enforcing the lockdown, or when developed states allow people coming from neighbouring states to access their superior healthcare infrastructure, while also sealing their borders. How does this workout within India’s federal setup?

Ragini is a 2020 graduate from the National Law University, Jodhpur. She likes exploring subjects such as jurisprudence, arbitration, corporate law and insolvency amongst others. She hopes to pursue these subject matters further through an LLM after some years of field experience in a firm.