Deconstructing The Sabarimala Dissent (1/3): An Analysis of the Essential Religious Practice (“ERP”) Conundrum

The Essential Religious Practice (ERP) Test, used to determine inviolable aspects of a religion, favors an interventionist attitude by courts. This is because the test enables judges to become prophets and determine what falls within the contours of a religion and what does not. 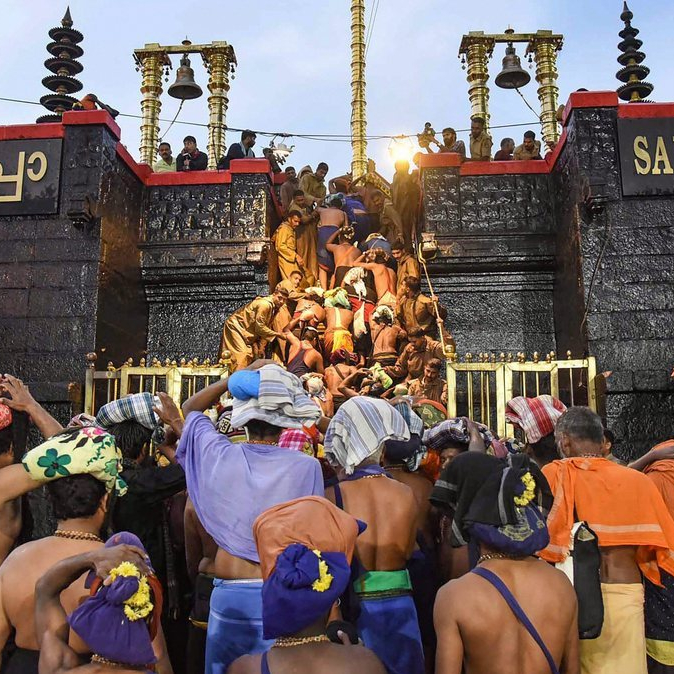 The lack of concrete jurisprudence regulating the relationship between religion and the law has created an intractable lacuna in the social and legal ethos of India. It has given rise to an unprecedented wave of uncertainty amongst the people who ever so often, knowingly or unknowingly, form a part of multiple cultural and social groups.  Although the Supreme Court, through various opinions has helped curb this uncertainty, the ambiguity with respect to the interference of the courts with religion may not be easy to circumvent. The Essential Religious Practice (ERP) Test, used to determine inviolable aspects of religion, favors an interventionist attitude by courts.[1] This is because the test enables judges to become prophets and determine what falls within the contours of religion and what does not. This, in fact, is a discretionary test which leads to inconsistent outcomes inasmuch as, it seeks to rationalize religion and purge it of superstitions.[2]In its pursuit of making a religion free of superstitions, the courts may end up depriving a particular religious denomination of their freedom to observe their religious practices. This is because what may constitute superstition for the courts, maybe an ERP for that denomination. In fact, one could argue that there is no dichotomy between religious practices generally and superstitious beliefs. Bearing in mind that Hinduism is often characterized as multicultural and pluralistic, establishing jurisprudence on ERPs which is both uniform and acceptable, may not be a practical approach. Furthermore, there exists no precedent or jurisprudence whatsoever which regulates the ERPs of the different denominations of a polytheistic religion like Hinduism, thus making the interference argument, at best a slippery slope one. Against the backdrop of the sole dissenting opinion in the Sabarimala case, we seek to suggest that, notwithstanding the domestic and international obligations[3] of India to harmonize principles of equality with matters of religious faith, the social and cultural practices of a community with a clearly “identifiable set of beliefs, customs and usages, and code of conduct which are being practiced since time immemorial, and are founded in a common faith”,[4] cannot be compromised or interfered with on the mere basis of their essentiality which in turn is a judge-centric approach.

In Part I (included in this post itself), keeping in mind that the ERP Test was one of the fundamental cornerstones of Justice Malhotra’s dissent, we lay out the clear distinction between ERPs of religion vis-à-vis, the ERPs of the different denominations of a polytheistic religion. This distinction also encompasses the fact that followers of the same sub-sect or denomination may also worship the same deity in different forms.

Interlinking the plurality of the Hindu Religion which is the umbrella faith for various denominations, we argue that the custom of restricting the entry of women cannot be said to be an ERP of the Hindu Religion. This custom is practiced only in the Sabarimala temple, and by the followers of the denomination who worship Lord Ayappa in this form, as a Nashtik Brahmachari, the followers of whom believe that he practiced the strictest form of celibacy, and himself placed restrictions on women from entering the temple,[5]

Through this part, we seek to establish, that although the courts have deliberated on ERPs of different religions in the past, deliberating on the ERPs of different denominations and their places of worship within a religion may not be a sustainable practice. In order to substantiate the same, we also give examples of different temples, where men are prohibited from entering, on the basis of a custom which has been followed since time immemorial.

In Part II, we lay down the arbitrary nature of this judge-centric practice, which has ever so often been subject to criticism and has intervened in the relationship between man and God, which should be a matter of individual choice. We use case laws to substantiate the arbitrary nature of the practice, and thus recommend that contemporary times require a test which is least interventionist and ensures the guardianship of individual rights according to the standards of constitutional morality (explained in Part III).

In Part III, we address the issue of Constitutional Morality in detail, while laying down the dichotomy which exists between the two schools of understanding of the same. We seek to suggest, that the essence of Constitutional Morality is in the harmonious interpretation of Articles 14 with 25&26. This is done against the backdrop of the minority opinion in the Triple Talaq judgment[6] which said that religious rights cannot be tested against constitutional morality. By juxtaposing this conclusion, with Part III, we seek to establish, that the Contemporary Validity Test (CVT) may be the right step to evolve jurisprudence and ensure that constitutional morality is interpreted in the most prudent manner possible. (Part II & III shall form the next post of this series)

In Part IV, we establish that India by legislating on the personal laws of religions has been following the theory of multicultural accommodation,[7] the purpose of which is to mitigate power differential between the members of a particular denomination. By doing this, we apprise readers of how, instead of mitigating the same, the court ended up reinforcing power hierarchies between them.

Having ascertained and contended that there exists a paradox between the theory of multicultural accommodation and the law, we contend in Part V that the ERP test, if continued by the courts, would further lead to such lacuna and discrepancies. Interlinking the above parts, we therefore suggest that the principles of transformative accommodation (explained later in this paper) and joint governance[8] be applied in such cases, so that the object and purpose of the State forming laws for various identity groups does not prove to be counterproductive, and the essence of rule of law, is maintained for the times to come.  (Part IV & V will conclude the series.)

I. ERP of a religion, vis a vis ERP of a Religious Denomination: Monotheistic & Polytheistic religions.

The reason we make the above contention is that, as opposed to monotheistic religions, the followers of which believe in the existence of only one God, Hinduism is a polytheistic religion, which means that it believes in the existence of multiple Gods and deities. This, in turn, means that every denomination which has a different set of beliefs, should have its own religious practices, and hence comes the argument of laying out the dichotomy between the ERP of religion and the ERP of a religious denomination. Moreover, as enumerated further in this part of the essay, it is not necessary that the religious practices of the same denomination or sub-sect of the same polytheistic religion be similar. This is by virtue of the fact, that, in a polytheistic religion, the Deity is worshiped in innumerable forms, and while the denomination may worship the same Deity, the form in which the Deity is worshiped in one temple may not necessarily be the same in the other temple. The ERP test cannot be applied to polytheistic religions as efficiently as it can be applied to their monotheistic counterparts.  One may argue that Islam, for instance, is apportioned into the Shia, Sunni and Ibadi schools which would essentially imply that their followers have a different set of beliefs and hence, different religious practices. However, the religious practices followed under Islam, even under the different schools remains the same. Illustratively, the right to offer Namaz in Islam is considered as an essential religious practice. This practice is uniformly followed by all the three schools of Islam, with the same methodology, i.e five times a day, kneeling in the western direction, and addressed to the Supreme God, “Allah”. There is no other school of Islam which endorses a separate methodology for practice as essential as Namaz.

One of the main reasons why the exclusion of women from the Sabarimala Temple in Kerala cannot be regarded as a practice of the entire Hindu religion as a whole but that of a separate denomination is due to the fact that there are other Ayappa Temples[13] in the country, where women are allowed to enter. The reason being that, in those temples, Lord Ayappa is not depicted as a Nashtik Brahmachari as is the case with the Sabarimala Temple. Thus, the form in which the Deity is worshipped (as enumerated in the previous paragraphs) changed, and consequently, so did the religious practice, therefore, making the followers a separate denomination. Moreover, in order to substantiate the plurality of the Hindu Religion, the list includes but is not limited to, The Lord Brahma Temple in Pushkar, Rajasthan[14] which prohibits married men from entering the sanctum sanctorum to worship the deity, The Mata Temple in Muzaffarpur[15]  which prohibits the entry of and assumes a “women only character” once the period of their menstrual cycle begins, The Kamakhaya Temple in Vishakhapatnam[16] which forbids men from entering the temple for four to five days to observe the privacy of women during the period of their menstruation. As contended by the Respondents, in the Sabarimala Case,[17] these temples do not unequivocally prohibit the entry of men and women, as the members of a particular class. They have riders, which include inter alia, married men, females of a particular age group, prohibition for a particular period of time. Therefore, the exclusion of men or women from temples where these practices started in “hoary antiquity and continued since time immemorial without interruption[18] is the essential religious practice of the religious denomination that manages the temple and NOT of the Hindu Religion.

The narrative that the ERPs of different religious denominations within a polytheistic religion and the ERPs of their different places of worship, devotees of which also constitute a religious denomination can also be interfered with, may prima facie seem justifiable under Article 25 and 26 of the Constitution. However, it is not in line with the essence of constitutional morality which is “based on the quintessential doctrines of the constitution and an individual’s autonomy and is not supposed to be swayed and redesigned by the sagacity of individual judges.”[19]

This is the 1st part of the series of posts on Deconstructing the Sabrimala Dissent.

Click here to access the 2nd part- Deconstructing The Sabarimala Dissent (2/3): Can the Contemporary Relevance of a religious practice override its essentiality?

Click here to access the 3rd part- Deconstructing The Sabarimala Dissent (3/3): Overcoming Multicultural Vulnerability through the Principle of Transformative Accommodation

[13] Devyani Sultania, 8 temples in India where men are not allowed to enter, available at http://www.hinduhumanrights.info/heres-a-list-of-8-temples-in-india-where-men-are-not-allowed-to-enter/ (Last visited on 24th April 2019).

[19] Constitutional morality Supra, note 7.at rality 8, 2019..8))hers (2017).ical Rights are religious practices. in ngs, while the redistributive schools are rooted in the constitution, February 12,2019, available at https://www.governancenow.com/news/regular-story/constitutional-morality-is-rooted-in-the-constitution-justice-dy-chandrachud (Last visited on February 28, 2019).