Transgressions : Life on the Cusp of Legitimacy (2/2)

Trans persons are extremely vulnerable to sexual harassment and violence and yet, they are totally excluded from laws preventing and penalising sexual harassment, domestic violence, sexual assault, and rape.

This post is the second in a series about trans rights. You can read the first part here. 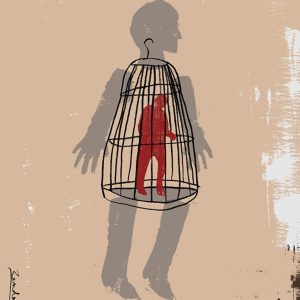 The colonial hangover of derision and suspicion regarding non-gender conforming individuals continues to taint Indian legislative system, resulting in either outright oppression of trans individuals under the legal establishment, or a more insidious form of oppression by exclusion from legal protection. For several decades, these communities have lived in the blind spot of legal reform, resulting in institutionalization of their hardship and injustice. Some of these are briefly discussed below.

Section 377 of the Indian Penal Code, a highly controversial colonial provision couched in Victorian morality that penalises sexual activity deemed “unnatural” by the State, has finally been repealed. While this diminishes a serious legal threat to members of the trans community, whose very bodies and sexual behaviour were deemed deviant under this law; there seems to be little progress in the way of sensitisation of the police and judiciary to the several ways in which trans people face sexual and other violence, humiliation and oppression. Recently in Hyderabad, following large-scale protests by the trans community, the police finally arrested Venkat Yadav, who has been accused multiple times of lynching, extorting, harassing, assaulting and sexually attacking trans women in the city with a gang of friends. While at the time of writing this post, Yadav is behind the bars, he has been arrested and released on bail multiple times before despite the community attempting to make representations before the police about his repeated offences.[1]

Trans persons, given their precarious position under law and limited support system, are extremely vulnerable to sexual harassment and violence. Yet, they are totally excluded from laws preventing and penalising sexual harassment at the workplace, sexual assault and rape, domestic violence (from family as well as intimate partner violence,) as these laws are exclusively applicable to females. Sexual violence against trans persons is often motivated by the desire to humiliate.[2] Such humiliation often stems from the desire to punish them for violating binary gender norms and assumed conditions of respectability.[3] Not only does this exclusion from legal protection seriously threaten the life and dignity of trans individuals, it further alienates them from the law by making the police and judicial establishment apathetic to atrocities committed against them. Trans women approaching the police to complain about sexual offence are frequently met with insensitivity, disbelief, even incredulity or violence, thus removing them from the protection of the law.

Similarly, the Immoral Traffic Prevention Act and various state laws against beggary inordinately target trans communities due to their traditional and involuntary reliance on sex work and beggary. By failing to differentiate between voluntary sex work and trafficking for prostitution, the ITPA (and the recent Anti-trafficking Bill) becomes another impediment in the path to livelihood, and is more often than not used to target individuals instead of pimps and traffickers.[4] Similarly, anti-beggary laws are used by states to forcibly re-home and confine trans populations into shelters where their conditions of life are reportedly even worse than the streets. Given the lack of alternative livelihoods available to trans persons, criminalising their only available means of subsistence threatens their very existence and is a cause for much harassment and extortion.[5]

The gender binary persistent in the legal connotation of identity and personhood, too, excludes trans persons from participation in civil law; including ownership and transfer of property.[6] This makes it difficult for them to attain financial stability, a threat that extends into their old age when it becomes difficult to indulge in begging or sex trade for a living. It also dis-incentivises their participation in the formal labour market due to difficulty in operating a bank account and paying taxes.

A Crisis of Citizenship

Vidhu Verma differentiates between the mandate of the Western and Indian perceptions of social justice: while the former focuses on poverty alleviation in a free market system, the latter takes into account group inequality based on social discrimination as a cause for social exclusion. Her understanding of social exclusion takes into account the “process of marginalisation” based upon traditional occupations and cultural factors.[7] Given the simultaneous evolution of the nation state and individual rights, citizenship as a concept is often interpreted in the context of individual rights vis-à-vis the nation-state. Most relevant in this regard is Held’s society-centred conception of citizenship: “Citizenship has meant a certain reciprocity of rights against, and duties towards, the community. Citizenship has entailed membership of the community … and various degrees of participation in the community.”[8]

Naila differentiates between the Western and post-colonial ideas of citizenship, arguing that the former flows from abstract individualism and the latter from factors like place of birth, lineage, caste, or other forms of group membership. These then are determined by highly culture-specific group hierarchies and individual affiliations. She further remarks on the nexus between social oppression and political disenfranchisement. Other examples come from South Asia where caste and gender, intertwined forms of subordination, have both operated through the construction of hierarchies of personhood, which do not simply deny “rights” to subordinate groups, but also the “right to have rights,” to shape their own forms of identity. The parallels between caste and gender subordination are striking but not surprising; both embody the same cultural logic of purity and pollution as a basis of valuation and devaluation.[9]

Much has been written about the extremely problematic nature of the Transgender Persons (Protection of Rights) Bill of 2016, critiqued heavily as contrary to the NALSA (2014) judgment by the Parliamentary Standing Committee. The Committee report (2017), which was initially rejected by the Government despite its more progressive and sensitive perspectives towards gender, was eventually accepted in 2018, with 9 out of key 11 recommendations reportedly being accepted by the Government (though a draft of the Bill is yet to be available publicly). The process of drafting the 2016 Bill, as well as its primitive understanding gender, were both criticised as exclusionary and top-down by members of the queer community. Similar exclusion continues to exist in the policy making circles responsible for the equally problematic Anti-Trafficking Bill. Curiously, despite clear directions by the Supreme Court to do so, the Bill also ignores the question of reservations for members of the trans community as a Backward Class despite the National Commission for Backward Classes suggesting that all members of the trans community not included under quotas on the basis of caste or tribe be included in the Central OBC list so they may take advantage of reservations in education and public employment.

It is vital for the end of their socio-political exclusion that this community be social and economic participation, and equally importantly, for them to be active participants in governance and policy-making. State policies for trans communities have been more sensitive than the 2016 Bill, even going so far as to recognise the principle of self determination of gender when the Bill adopted a medical model of determination through expert enquiry (as in Orissa), free education in a university as well as a welfare pension for trans persons (Tamil Nadu) and reservation of seats in education including higher education (Kerala). That is not to say that the fight is anywhere close to won – while 377 may be touted as a reversal of years of state apathy and antipathy to those deviating from the cis and hetero binary; class, caste and transphobia continue to pose threats to the celebration and full enjoyment of citizenship by trans people. Lawmaking conveniently ignores personal laws which protect intimacy and inter-generational inheritance (as well as social and economic capital) for trans people, and downplays the threat of violence against trans people’s bodies. The 2016 Bill only vaguely referred to sexual assault and penalised it with a two year prison term – and trans people are excluded from laws defining and criminalising various forms of sexual and domestic violence, harassment and intimidation that protect cis- women.

Kavya Bharadkar is a student of the 2nd year MPP Batch at NLSIU, Bangalore.

[2] Narrain, Arvind. 2013. “Violation of Bodily Integrity: the Delhi Rape Case Among Others.” Economic and Political Weekly XLVIII, no. II

[4] Creating Resources for Empowerment and Action. 2012. UPR Submission on the Harmful Effects of Criminalisation of Sex Work on Sex Workers Human Rights in India . Submission, CREA, 2012.