Universal Basic Income: Incentive to Innovate or Excuse to Snooze 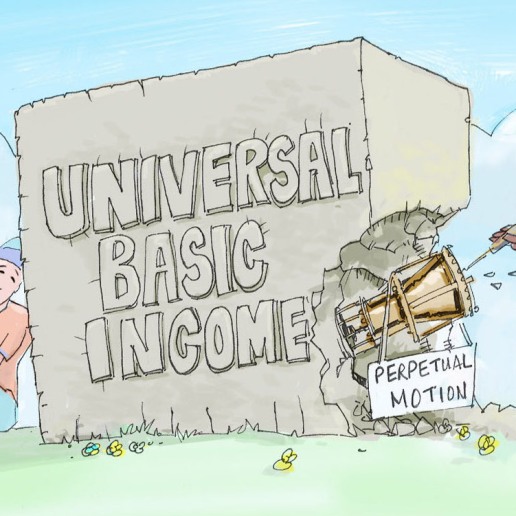 “I don’t support UBI because an idle mind is the devil’s playground.” Some skeptics of proposals to institute a universal basic income (UBI) share this sentiment, recently expressed by an uncle of mine. Results from cash transfer programs that approximate a UBI suggest that this worry might be overblown; even generous transfers may not be large enough to disincentivize work or encourage frivolous spending.

Where critics on the right worry about the incentive effects of a UBI, concerns exist on the left as well. Some worry about the costs of providing a universal basic income for instance. Another critique takes the broader political economy perspective that replacing already inadequate welfare programs with a single transfer might make services targeted towards the poor more vulnerable to being cut. This latter critique is grounded in wariness towards an idea that has gained strong purchase within business communities, not the most progressive institutions historically. Jean Dreze articulates a version of this critique in pushing back against UBI proponents in India:

“[T]here is a real danger of UBI becoming a Trojan horse for the dismantling of hard-won entitlements of the underprivileged. The recent wave of pro-UBI propaganda in the business media (generally hostile to ambitious social programmes) is suspicious in this regard.”

Other academics have also cautioned about the advocacy around UBI outpacing the existing evidence; for instance, we know very little about what effects a guaranteed income might have at scale. Moreover, any guaranteed income scheme will not be enough in a context where the supply of basic services with large required investments is inadequate.

One thing to be especially mindful of in the context of this debate is how much slippage exists between various programs that, while similar, differ from each other in critical ways. Scan the previous three paragraphs and note how I have talked about UBI, cash transfers, and guaranteed income. These are related ideas, but in talking about a UBI, it is essential that we establish what it is we are talking about. Robert Reich provides a succinct description (emphases added):

“It’s universal in the sense that everyone would receive it, basic in that it would be just enough to live on and cash income rather than voucher-based…”

Very little evidence on a true universal basic income i.e. a cash transfer, with no strings attached, that everyone gets. Early evidence from one of the closest national programs, in Iran, has heartened UBI proponents. However, researchers caution that getting rigorous evidence on the effects of a UBI are extremely difficult to do; even some of the most ambitious efforts underway today in a variety of contexts, from Kenya to California, are only unconditional cash transfers that do not meet the universality condition. What might the learning potential for UBI discussions be from these trials?

“Because they are relatively small and most of the funding comes from private sources, the trials won’t provide a sense of whether governments could afford a big public programme or whether citizens would be willing to fork out extra taxes to fund them. “Medicine can be scaled up, but this isn’t as easy,” says [economist Damon] Jones. A new cancer drug might extend lifespan by 3 months, which stays true whether 10 people take the drug or 10,000. In a UBI trial, 10 people receiving cash will have a very different impact on a community compared with 10,000.”

This is similar to the point raised earlier about the current evidence base not giving us enough indication of what UBI-like programs might look like at scale. However, the more subtle point made by Jones – that even the best designed studies to get at what a UBI might look like – are inherently limited because they cannot be run at the relevant scale. The “U” is a critical component of the UBI, whether for its role in building a broader coalition of support, or because it obviates the need to undertake expensive, imprecise targeting exercises. This is not to say that we need to let the perfect be the enemy of the good here; when studies are grounded in good theory, they can generate evidence on what a program might look like at scale. Rather, it is to sound a note of caution about how to proceed in parsing the evidence on UBI and what the prospects for learning more might be.

Ultimately, there may not be a single right answer either. The question is not whether a UBI is “good” or “bad” in a vacuum, but rather, whether a UBI under the current constraints is suitable for a country like India. On that, while we can infer some possibilities from theory and existing evidence, the jury is still out.

Rohit Naimpally is a Senior Research and Policy Manager at J-PAL North America where he works with governments, non-profit organizations, foundations, and private enterprises to develop rigorous evidence on policies and programs that impact poverty. He has also worked at Innovations for Poverty Action (IPA) on a variety of financial inclusion studies in South Asia and Sub-Saharan Africa.

Rohit holds an MA in Social Sciences and a BA in Economics, both from the University of Chicago.