As the polity pushes to resurrect our economic destiny dragged into deeper chasms by the pandemic, Make in India and Atmanirbharta have emerged as its literary levers. The inner policymaker of the argumentative Indian though cannot help but ask: what shall we make and where are the jobs? The emphasis on these jhumlas is not without historical merit: almost no country in the post-war period has been able to reach the high-middle income category without a significant spurt in manufacturing. By moving from an agrarian to a service-driven economy and largely skipping the manufacturing step, Indian has been a major anomaly in the “natural order” of structural transformation.

In this article, we present three facts on the manufacturing sector in India based on publicly available datasets. Starting at a macro level, the Public Labor Force Survey (PLFS) 2017 tells us that a staggering 38% of the working age population (20-65 years) is out of the labor force. The breakup of the remaining 62% is as follows: 4% are pursuing education, 3% are unemployed but looking for work, and the remaining 55% is our gainfully employed workforce. 43% of this workforce is in agriculture and the remaining in the non-agricultural sector.

In the non-agricultural sector, the number for formal manufacturing, which historically is the critical step of structural transformation, is extremely low. 12% of the workforce is in construction, 10% in retail and wholesale (think the local kirana stores), 5% in land transportation (think e-rikshas, autos, bus, truck and rail), 4% in education (think teachers, admin staff, etc.), 2% in food and beverages (think dhabas, restaurants, etc), 2% provide personnel services (think haircuts, domestic help, security, etc.). Of the remaining, about 10% are in all other services and a mere 12% is in manufacturing. Even here a large number of jobs are in food processing (from rice mills to uncle chips), tobacco and furniture. If we take these out, all other manufacturing employs about 10% of the total workforce. In comparison, close to 30% of the workforce in China is employed in manufacturing.

Fact #2: Manufacturing jobs are concentrated in a few districts

The two maps depict the spatial distribution of manufacturing jobs according to the ASI and EC. Broadly they paint a similar picture– in poet Khalilur Rahman Azmi’s words, ḳhalā hī ḳhalā (emptiness upon emptiness). The ASI map reveals that even in the states where formal manufacturing is supposed to be thriving, such as Maharashtra, Gujarat, Andhra Pradesh and Tamil Nadu, a granular look delineates a handful of regions which are the key drivers. In contrasting the two maps, the reader can also notice the EC one is somewhat denser than the ASI. This illustrates that most manufacturing firms in India stay very small, which leads to our next fact.

Most of our manufacturing “firms” are abysmally small. As per the EC, the 90th percentile firm in terms of total employment comprised 4 workers. Even according to the ASI which contains only registered plants, the size of the median firm is 20 workers and that of the 75th percentile firm is only 48 workers. Typically, productive firms grow large and drive out the uncompetitive ones through a cycle of creative destruction. As the Economic Survey of India 2015-16 pointed out, in India firms don’t grow large enough over time and neither do they exit. So, we have ended up with a large number of continually surviving unproductive firms.  Indeed, according to the ASI, 60% of total formal manufacturing jobs are in factories with an annual turnover of less than Rs 250 crores which is the threshold set for MSME credit guarantee scheme as part of the Covid-19 rescue package. This is further corroborated by the macro data on value-added: According to RBI Handbook of Indian Statistics 2019, in year 2016-17, the share of manufacturing in total value-added is 16.3 %, which is (surprisingly) smaller than the share of agriculture and allied sectors (17.9 %) as well as trade, transport, hotels and communication (18.2%).

The puzzle and the challenge

India’s growth composition is a global anomaly and also a deep puzzle of political economy. Over the last few decades through the Golden Quadrilateral highway project and PMGSY rural roads project, physical connectivity has improved dramatically, and so has communication ease through the spread of wireless data. While people have migrated to the congested job creation centers, resources haven’t flown to the capital starved locations; few (high productive) jobs have been created where the labor is in surplus, especially in the Hindi heartland. In fact, if you draw a fat curve from Delhi to Kolkata, except brick kilns and rice mills, there is not much industry.

There are competing explanations for why India has mostly missed the manufacturing step of structural transformation, and why the sector continues to be spatially concentrated. Differential contract enforcement, difficulty of land and labor laws, poor electrical connectivity, limited intellectual buy-in of pro-market reforms, unskilled labor force, and capital misallocation. While some of these issues are being addressed, others need a dramatic overhaul, if the promise of our demographic dividend is to be actualized. 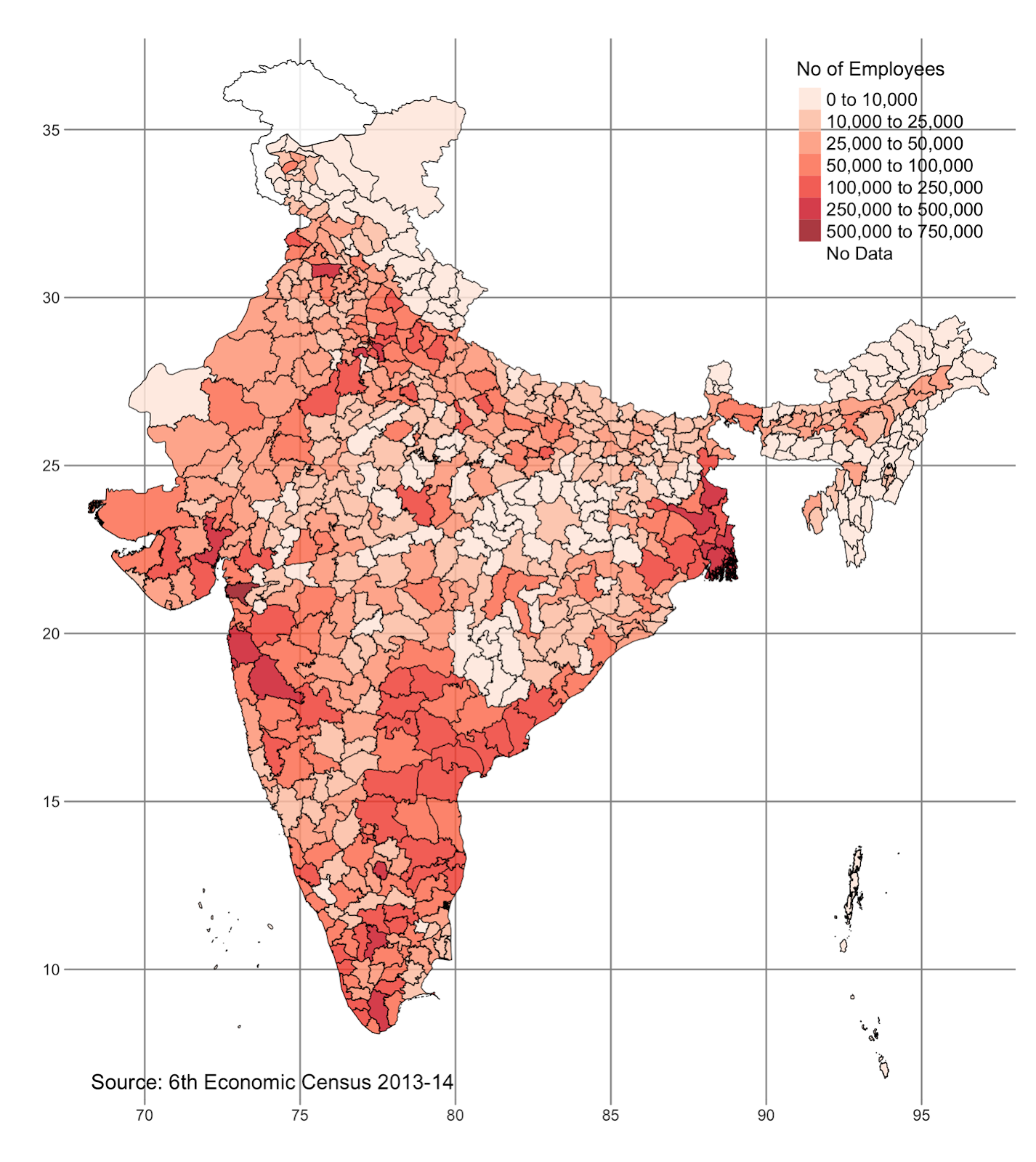