Growing Opaqueness of Virtual Hearings and the ‘Open Court’ Ideal 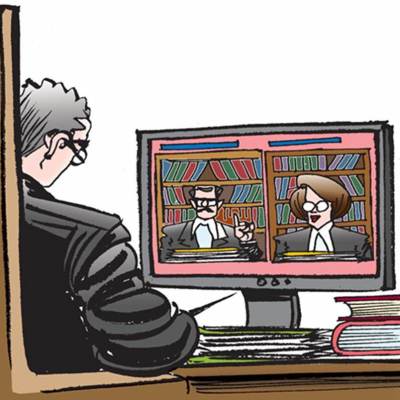 If it has never been said more often, so it shall be repeated – ‘Not only must justice be done, it must also be seen to be done.’ From the philosophical connotation of this term, as Kant or Lord Hewart would have seen it, the ongoing COVID19 pandemic has brought the literal meaning of this phrase into consideration. What is access to justice in the age of virtual courts, where remotely held video conferencing hearing is a norm? Justice, then, is only what the courts want you to see, obliterated and refracted through the sensibility which says – ‘Only this much is sufficient for the public to see.’ Unlike the Supreme Court, the Delhi High Court and all the other subordinate courts of Delhi do not provide public access to hearings conducted through video conferencing. The term ‘public access’ here also, and more importantly, refers to access to media professionals.

The current system of holding virtual hearings through video conferencing was a decision taken by the courts to continue the administration of justice while keeping the risk of spreading the virus in check. In the existing system, as it functions as of date, the only legitimate way through which the public can access court proceedings is through judicial orders uploaded on the court’s website. Now, there are some serious concerns with this existing system which needs to be assessed as they impinge upon the principle of ‘open court ideal’.

When it comes to the High Court, there is no set timeline that the judicial officers or the court staff need to follow with regards to uploading of orders. While orders of some judges are uploaded during the court hours, those of others are nowhere to be seen even 2-3 days after the hearing. In addition to this, not all the orders of a concerned judge are uploaded at the same time. Even if one tries to navigate through this irregularity in uploading of orders, there is a problem of ‘corrupt files.’ Even when some of these orders are displayed on the website, they can’t be opened for hours as the window shows the file to be corrupted. Amidst all these procedural hindrances, one should not lose sight of a principled issue that these orders record only that much which the concerned judge deems necessary to get recorded. There’s no malicious imputation here; what needs to go in order is a judicial prerogative and this style of dictating orders was followed even during the open court hearings. However, there lies the caveat – open court hearings. When the hearings are no longer open for public scrutiny, all the details, arguments, phenomenological considerations, ‘off the record’ discussion that serves the heat of the proceedings – are lost. Those who have been covering court proceedings for media organisations would understand the magnitude of this loss, and the agony that ensues.

These phenomenological considerations, and all that discussed above, provides a sociological narrative to a judicial proceeding; it opens up the technical juridical procedures to diverse public opinions and accountability – the open court ideal. What can be said more about the importance of this open court ideal than just highlighting the impact created by the coverage of Delhi Riots writ in Justice Muralidhar’s court, or the Sunday hearing in Tis Hazari clash matter?

Now the attention shifts to the district courts where the situation is even bleaker; and the opaqueness intensifies. There are two ways through which one can legitimately access the orders of the trial courts in Delhi – the e-courts portal and the ‘Lockdown Orders’ section in Delhi District Courts website. The problem with the former is that while it shows a particular case to be listed, along with the order, when one clicks on the order link a window opens which shows ‘order not published’. If this is the scenario with written orders, one can only imagine the opacity of orders pronounced orally. It was also noticed that orders for certain publicly ‘sensitive’ cases, such as Safoora Zargar bail order or the JNU clashes order, were not even listed on the website. Media professionals had to access these orders personally from the lawyers, which I believe, is not entirely legitimate, but it’s a discussion left for some other time. This problem persists in the ‘Lockdown Orders’ portal also.

Moreover, what else can be said about the insufficiency of the orders recorded by the trial courts. There is hardly any presence of the arguments advanced by the counsels in these orders; what can one then really expect when it comes to these orders reflecting what transpired during the proceedings. There is a change, though quite minuscule, in sight for future hearings. Recently, the Delhi High Court released detailed and quite ambitious guidelines on holding remote hearings through video conferencing. There’s a clause in these guidelines which says: ‘The Court shall endeavour to make available sufficient links (consistent with available bandwidth) for accessing the proceedings.’

There’s a visible caveat there which can be problematic – ‘consistent with available bandwidth.’ This becomes even more profound in light of the matter already pending before the court which highlights the lack of work done by the Delhi Government in digitising the courts and improving the range of bandwidth. Apart from this, there’s also a concern regarding looming ambiguity which can further jeopardize the open court ideal – ‘sufficient links.’

The age of pandemic demands social distancing. ‘The extraordinary crisis’, as the courts have timely defined it as such, calls for structural changes. However, structural changes should be innovative and inclusive, not knee-jerk. These changes have to incorporate the open court ideal as an indispensable value of judicial transparency and accountability. Social distancing that embraces long solidified judicial values. Hearings can be virtual but they cannot be opaque. This is the balance that the judiciary needs to ponder upon as of now.

Karan is a legal journalist at Live Law India and works primarily on criminal law and policy.