What are the implications of India following the China model in the proposed amendment to the IT [Intermediary Guidelines(Amendment) Rules] 2018. 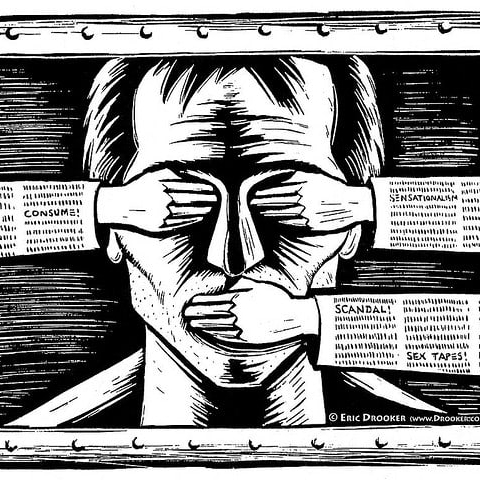 Recently, the Indian government proposed changes to the Information Technology [Intermediary Guidelines(Amendment) Rules] 2018, which could result in increased governmental interference in the cyberspace. Eerily, this policy draws comparisons to similar draconian policies being implemented in one of the most totalitarian countries in the world, China. The Implementation of this policy in India, has wide-reaching ramifications, and would lead to a loss of privacy and increased state surveillance online. Thus, it’s important to draw a comparison between the two countries, to explain why such policies strike at the very root of democracy on which India is built, and therefore should not be implemented.

In Part II and III of this article, I elaborate upon the censorship policies of both India and China, and their similarities. In part IV, I examine the presence of Article 19 in the Indian Constitution, drawing a direct comparison to the lacuna of such a law in China. Further, I explain how the right to privacy plays an integral role in India’s interpretation of censorship laws, and how the proposed policy goes against this right. In Part V, I discuss the various implementation problems that would arise if these policies were enacted.

China’s current censorship structure, given legitimacy by the presence of content regulations and a system of internet filters called the “Great Firewall”, focuses on ensuring government regulations and sanctions for every piece of news on the Chinese internet. They do this, by using a combination of propaganda directives and self-censorship, using both Artificial Intelligence tools, and human censors, to ban any content the government might find illegal or inappropriate.

The major aim of Chinese censorship is to censor information about politics and anti-establishment speech. An external internet service provider is often not allowed to function or host any news on their platform, till permission is obtained from the requisite authorities, and this approval is rare. This is since the government mandates an extremely high threshold for news publication certificates, which is evident in only 8 out of 430,000 websites getting permission to disseminate news, in the Guangdong Province in 2008. Chinese Authorities also have a system of both prior, and post-publication review of news, alongside issuing daily rules on the handling of news. Further, the government can take a central role in the management of these news organizations. The government also uses the annual evaluation of websites, to further filter out websites which aren’t following censorship rules.

Further, propaganda departments are given the power to issue directives to websites to delete certain articles. Non-compliance with these directives could once again lead to the revocation of licenses for these websites. The major method of identifying these problematic articles, is through Artificial Intelligence tools, which have the ability to search and discover keywords, and sensitive phrases. If verified as problematic, the department can order the website to delete it. A major proportion of articles that get deleted, are politically inflammatory, or anti-Communist party. Thus, deleting them immediately, helps prevent public discourse around any topic that may potentially challenge the party’s authority.

ANALYSIS OF INDIA’S CURRENT POLICIES AND SIMILARITY TO CHINESE POLICIES

In India, currently, Section 79 of the IT Act, grants intermediaries protection from liability arising out of any third party’s illegal content. The recently proposed changes however, go against that, and aim to curb the spread of fake news, by forcing intermediaries like Facebook, and other social media platforms, to remove content the government finds “hateful”, “libelous”, or “invasive of privacy”, within 24 hours. In the “Intermediary Rules” of this Act, as soon as the intermediary is made aware of illegal content, they are expected to remove it, and block public access to it. The knowledge of this illegality could stem from their own monitoring, a third party complaint, or from a government notification. The court has however clarified, that the intermediary is only mandated to do so, if a government notification or court order is issued, and no such obligation arises from a third party complaint.

Further, these proposed changes, order platforms to create automated tools to ensure this “unlawful content” doesn’t appear online, and allows these services to store user data indefinitely. Also, it forces intermediaries like Whatsapp, to drastically weaken their encryption policy, so that the government can get access to messages, and trace messages back to their original senders. Since India’s censorship policies have historically been in favour of freedom of speech, this proposed amendment brings up the question of it’s validity from a constitutional perspective.

Further, in 2018, under S. 69 of the IT Act, 10 government authorities were given the power to monitor any computer or device in the country, and decrypt any information or conversation that they believe is contrary to national security. Even S. 69A of the IT Act, gives the government legislative backing to block any online content they believe goes against the “security, defense or sovereignty and integrity of the state”. The government can also order service providers to go offline, and impose several content restrictions on the public, with the same objective. This power under S.69A is extremely broad, and can be prone to misuse without judicial oversight.

Alongside that, recently, Temporary Suspension of Telecom Services (Public Emergency or Public Safety) Rules under the Indian Telegraph Act, 2017 was notified. When implemented, it allows the government to close the internet in times of crisis, as was evident with it’s extensive use during the Anti-CAA/NRC protests across the country. The main issue with this law, is that there is no remedy for someone who’s speech has been censored, no way to appeal against it, and no protocol in place for it’s reinstatement. Further, there are no checks and balances, in place for the misuse of this power; which once against brings forth similarities between Chinese policies.

CONSTITUTIONAL CRITIQUE OF WHY CHINESE POLICIES CAN’T APPLY IN INDIA

While concepts like the “Doctrine of Separation of Powers”, are widely accepted in India, they’re simply an ineffective constitutional provision in China. China, being a one-party system, places an inordinate amount of power in the hands of the Communist Party, which wields absolute control and has an institutionalized position, thus ensuring it’s decisions can’t be questioned. Thus, censorship in China can continue, with almost no interference from the judiciary. In India however, the powers of the executive are restricted by the judiciary and the constitution, and can be challenged. A larger emphasis is placed on the rights of the citizens.

Also, the presence of a fundamental right for freedom of speech(i.e. Art. 19) in India, is the very essence of the Constitution, which is lacking in China, since freedom of speech there is rarely enforced, and merely a normative right. The role of the press in China, is to further the interests of the ruling party, by producing only information they believe citizens should have access to. In direct contrast, in India, freedom of the press, and specifically the right to receive and circulate information, under Article 19, is essential to ensuring independence from the government, and hence leads to the furtherance of the democratic process in the country. Censorship by the government, to this extent, would lead to a lack of free debate and open discussion, and would directly infringe upon rights of the press under Article 19, leading to a uni-dimensional narrative.

Further, being a democratic country, with elections every 5 years, the ruling party in India is often focused on portraying an unblemished view of themselves, since they wish to get elected again. Thus, giving such extensive powers of censorship to the government, with no proper restrictions, could lead to them using it as an electoral tool, to garner more votes, hide information against them, spread propaganda and mould public opinion. This could further result in the government suppressing and censoring certain pertinent pieces of news under the garb of “Public Order”, or “Security of State”.

Giving such immense powers to the government, also brings up harrowing questions about the lack of privacy of an individual. For the government to implement censorship, they need to monitor the cyber usage of an individual, and often also store data, which in turn leads to a lack of privacy.  In India, the right to privacy was recently brought under the purview of a fundamental right, under Art. 21 of the Constitution. In fact, in Puttuswamy v. UOI, the judges explained that the right to privacy includes the negative right against State interference, concluding that data protection laws should be enacted in the country, to further prevent this. So, if the Indian government gets the same powers as the Chinese government, i.e. having a complete free hand on all information that goes on the web, that would lead to them having access to an individual’s data at all times, thus encroaching upon the right to privacy,. It was also stated in Puttaswamy, that if the same goal, i.e. protecting national security can be done with a smaller infringement upon fundamental rights, then that approach should be followed. Here, following the Chinese model of censorship is the most extreme approach possible, and leads to a maximum infringement of fundamental rights, since data is being stored, monitored and regulated at all times, while simultaneously extensively restricting freedom of speech; and thus should not be followed.

Further, India might encounter several implementation issues in following China’s censorship policies. A major reason for China’s success in complete censorship, is the availability of AI tools and economic resources. In the Indian context, the government doesn’t have the regulatory infrastructure in place, on scale of the one in China. Even the government’s recent order to ISPs to block access to 32 websites, was marred by the lack of clear instructions on how to do so, thus resulting in each ISP using a different mechanism to censor information, which led to an easy bypass of the ban.

Also, international social media companies have explicitly stated that it wouldn’t be feasible for them to create a country-specific censorship system, on such a large scale. Considering each intermediary has different control over the data they possess, they often feel that filtering content entirely would be counter-productive to the extent, that its cost would be prohibitive. Not just that, but companies like Whatsapp, whose main selling point is the encryption and privacy they provide, would end up having to restructure their whole service, which would be expensive and impractical.

While stemming fake news is essential, following China’s censorship policies in India is simply not feasible for a democracy, considering the number of fundamental rights it violates. In a democratically elected government, transparency is paramount, and an arbitrary use of powers resulting in a skewed one-dimensional narrative, should not occur. A possible solution to this, is to have an independently appointed body censoring fake news, or news that affects national security, rather than following the Chinese method of having the government censor. This’ll lead to the government not having an inordinate amount of power, while simultaneously accomplishing the balance between fulfilling the government’s objective of a safe web, and ensuring the constitutional liberties of each citizen are safeguarded.

The author is a student at the West Bengal National University of Juridical Sciences, Kolkata.