Increasing urbanisation is a huge challenge and some, including the Indian government, are now considering the use of Smart City technologies as a tool to improve the quality of life of its citizens and to lessen the load on their creaking infrastructure. 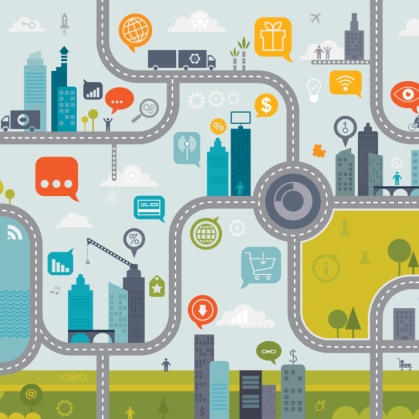 The reality of urbanisation

We live in a world of rapid urbanisation. Urbanisation by itself is not new, humans have always thrived by living together in cities. What is new, however, is the rate of this change. In 1960, only New York and Tokyo had more than 10 million people but by 1999, there were 17 cities of more than 10 million people[1]. and it is projected that there will be 41 megacities by 2020 of which 7 will be in India alone. Here is some more food for thought; Asia (other than Japan) and Africa are some of the least urbanised regions in the world and it’s expected that they will urbanise further as they develop.

Increasing urbanisation is a huge challenge and some, including the Indian government, are now considering the use of Smart City technologies as a tool in improving the quality of life of its citizens and to lessen the load on their creaking infrastructure.

In this paper, I am going to limit myself to one narrow portion of this discussion. That is the emergence of IOT, its application to Smart Cities and the factors which may limit innovation.

First things first: what is IOT? IOT or the Internet of Things refers to a platform or system whereby everyday devices are connected to each other. Think of everyday items like a fridge being connected to the internet; transmitting data and trends on usage or being set up to independently conduct tasks (e.g. notify you if you are running low on milk). The benefit of everything being connected is obvious; for example, traffic lights could collate data which can then be used to build efficient transportation corridors in a city.

Smart City technology will be primarily based on the usage of IoT applications to become a reality. To use a metaphor, IOT will be the alphabets to Smart Cities’ sentences.

While all this sounds very exciting, for IOT to become a reality, continued innovation is key. Unfortunately, there are many environmental factors that could potentially stifle innovation and hence there is a need for a comprehensive policy review. Some of these limiting factors are:

1. Interoperability and Intellectual Property: For IOT to be a real wellspring of innovation, the devices on the network need to work with each other. While this sounds simple enough, the reality is that most of the platforms and products today are not technology-agnostic and only work with those from its own parent or type of technology. This is a huge problem which is exacerbated by the general trend in Intellectual Property (IP), particularly patents. A founding principle of patenting was that a patent should “encourage innovation while providing the inventor with the ‘least possible’ financial benefit”. Unfortunately, over the past few decades, patents (and IP rights in general) have started to be considered an absolute right and have lost their focus on innovation. Unless corrected, this will have a severe limiting impact on innovation in IOT. There have been some attempts to resolve this by way of Standard Setting Organizations (SSOs) and F/RAND licensing, however, the actual practice in this area is problematic. To give one example, a US court recently estimated that 3,000 patent licenses were required to implement the IEEE 802.11 Wireless LAN standard (this standard is the basis of WiFi and seems to suggest that SSOs may not be helping drive innovation). We should consider if ‘ownership’ is a principle that should apply here and whether a more effective freedom of use/license model will be better.

2. Access: According to Gartner, there are 6.4 billion IoT devices in use right now, with this figure expected to hit 20 billion by 2020. If you have ever failed to make a phone call during rush hour, you know this is a problem. How will we manage so many more devices since IOT will leverage the existing network infrastructure? Telecom companies are trying to solve this huge limiting factor by implementing 5G technology which is expected to enable more efficient use of the network. The initial cost of this technology is very high, however, and given the state of the financials (due to low prices and returns) in the telecom industry, there is a fair bit of concern around how this can be achieved.

3. Security: The UK’s National Fraud Intelligence Bureau has estimated that 70% of the frauds in 2013/14 included a cyber element versus 40% in 2008/9. Imagine a situation where internet-connected products have weak cyber-security measures, the fraud or hacking risk may itself derail innovation in IOT. In addition, the cybersecurity industry is very fragmented. Network giant Cisco estimates that on an average, each company has 70 different security vendors on their network, this makes effective management of cybersecurity a huge problem. There is evidence, however, that the industry is consolidating and this should be good news for continued innovation in IOT.

4. Data Privacy: Privacy concerns around IOT may also be a limiting factor. There are two broad issues here. Firstly, I think it’s fair to say that most developers don’t focus on data privacy in the initial period of their development lifecycle. This is a mistake, particularly since even a minor data breach could lead to bad publicity and cripple the business and brand. Privacy-by-design principles incorporated at an early stage will be a huge competitive differentiator while limiting catastrophic breaches. Secondly, recent regulatory trends, particularly the European GDPR, which might stifle small enterprises. Among its requirements, the GDPR imposes a heavy penalty on companies if there is a breach. The main concern from an IOT perspective is that the risk of heavy penalties may tilt the balance against small companies and as most innovation traditionally comes from smaller companies, this could be an important limiting factor. There is already some anecdotal evidence that companies are now preferring to use bigger vendors since they can share some of the financial burden.

5. Product Liability: Last, but not least, are the issues around product liability. Imagine your IOT product is a part of a larger device like a car and it causes the bigger device to fatally malfunction. This could have a disastrous impact on the industry as a whole (see the media reaction to accidents involving self-driving cars for what could happen).

We cannot expect regulators to fix this for us. The law in most countries hasn’t kept pace with change. It took regulators decades before they started looking into personal data usage by social media companies, for example.

The need, in my view, therefore, is for industry bodies to step up. A few recent approaches to building standards and certifications such as the UL Cyber-security Assurance Program are promising and may show us a way to achieve this emerging industry’s true innovative potential.

To be clear, a certificate will not solve all the issues, but it can show that a developer has taken reasonable steps and may mitigate subsequent consequences.

In the meantime, the answer to the universal question: “Am I smarter than my toaster?” will remain a strong (though temporary), “Yes”!

Navneet is a technology lawyer based in Bangalore. His public profile is at: http://www.linkedin.com/in/navneethrishikesan. All views expressed here are personal.