Privacy & Transparency as Complementary Rights: Inadequacies in the proposed amendments to the RTI Act

By leaving essential terms undefined and placing a higher burden to disclose personal information, the amendments proposed by the Srikrishna Committee are defeating the purpose of a right to privacy i.e. to make the state more transparent and the citizen less transparent 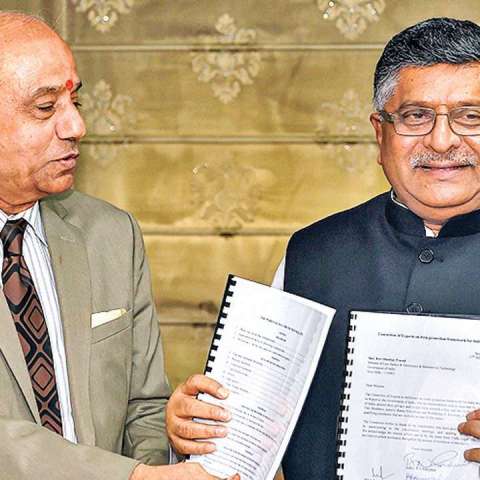 The B.N. Srikrishna Committee was constituted a year ago by the Government of India to draft a data protection law for India. Recently, the committee submitted the draft “The Protection of Personal Data Bill, 2018” comprising 15 chapters that address various facets of a data protection regime. In the final chapter of the proposed bill, the committee suggested amendments to the Right to Information Act, 2005. The controversy around the proposed amendments have brought to the fore the conflict between a right to privacy and a right to information; with the fear of the former being used as an exemption to make the State less accountable.

While conflicts between privacy and transparency are often highlighted, it is essential to focus on their complementary nature to arrive at a balance between the two fundamental rights. A right to information provides citizens’ access to information about functioning of the state and the right to privacy provides citizens’ control over collection, access and use of their personal information. They are described collectively as forms of protection against the Leviathan state that aim to restore the balance between the citizen and the state. According to László Majtényi, the first parliamentary commissioner for data protection and freedom of information in Hungary, both the rights have a common purpose “to continue maintaining the non-transparency of citizens in a world that has undergone the information revolution while rendering transparent the state”.

Ambiguity in the words of the existing provision

Section 8(1)(j) of the existing RTI Act exempts the disclosure of personal information which has no relation to public activity or interest unless it is justified by a larger public interest. There exists considerable ambiguity about what constitutes “personal information”, “public activity” and “public interest” which has led to several arbitrary refusals of RTI requests. Even after privacy was declared as a fundamental right in the Puttaswamy judgement, neither its contours nor its grounding with respect to transparency was deliberated upon. Privacy was based on abstract terms with only national security and social welfare considered as its possible exceptions. Therefore, the question of what constitutes ‘personal information’ is left at the mercy of Public Information Commissioners who have in the past used the privacy exemption arbitrarily to deny critical public information. According to Sailesh Gandhi (former CIC), the same information commissioners are often appointed without procedure and lack experience in dealing with RTI matters.

The suggested amendments to the RTI act lay down a three stage test to curb a privacy right similar to European proportionality test proposed in the Puttaswamy judgment. This test requires a structured procedure to be followed to curb a legal right. The first prong of the test requires the disclosure to be suitably backed by larger public interest and related to function, action or activity of the government. Next, the disclosure must be necessary to achieve the object of transparency mentioned in the first prong. Finally, this disclosure must be proportional with respect to other competing interests like privacy.

While the amendments require the executive to follow a more structured procedure while dealing with RTI requests, the larger problem of ambiguity continues to persist. Moreover, as the test places a higher burden to curb privacy of government officials and continues to leave the scope of privacy to the mercy of Public Information Officers, it might dilute transparency requirements of the RTI Act even further.

Failures of the amendment

The conflict arises when a public official attempts to shield their actions from public criticism by citing the privacy exemption. An important distinction, therefore, needs to be drawn between people in positions of authority and private individuals. The European Court of Human Rights held in 2014 that the public’s right to be informed may in certain circumstances even extend to aspects of the private life of public figures, particularly when politicians are concerned. It is a generally recognised principle that elected officials are more accountable than private individuals even when it comes to their personal lives. Therefore, the threshold to disclose personal information must differ accordingly. For example, disclosing educational records of an elected official must be subject to an easier threshold in comparison to the records of a private person.

Similarly, there have been confusing orders & jurisprudence related to disclosure of assets and incomes of public servants. Income tax returns have majorly been characterised as personal information exempted from disclosure. While a 2002 judgment of the Supreme Court held that there was greater public interest involved in a right to information plea than a right to privacy counter, a 2013 judgment diluted the same principle holding that disclosure of public servant’s emoluments and assets were exempted from S. 8(1)(j) as having “no relationship to any public activity or interest”. The income tax records of an individual can be argued to be disclosure exempted on the basis of abstract terms used in the Puttaswamy judgment like informational privacy or secrecy. Therefore it is essential to draw a distinction between a private individual and an elected official & characterise the same as relating to an essential public function of the state.

A law on data protection needs to understand the complementary nature of right to privacy and a right to information and aim towards making the state more transparent and the citizens less transparent. While structured procedure increases accountability in dealing with RTI requests, it is meaningless without a right to privacy being grounded in requirements for governmental transparency. Disregarding the complementary nature of the two rights and the higher burden imposed by the test skews the balance in favour of privacy and against transparency thus, defeating the purpose of these rights.

Sayan is a IIIrd year law student at NALSAR University of Law, Hyderabad. He is interested in public policy, human rights, and constitutional theory.