Of Bullets & Ballots: An Analysis of the General Elections in Pakistan (1/2)

Tearing the veil of Imran Khan’s success reveals the active role played by the military in PTI’s victory. With their pervasive influence in politics, the army continues to blur the line between civilian and military responsibilities. 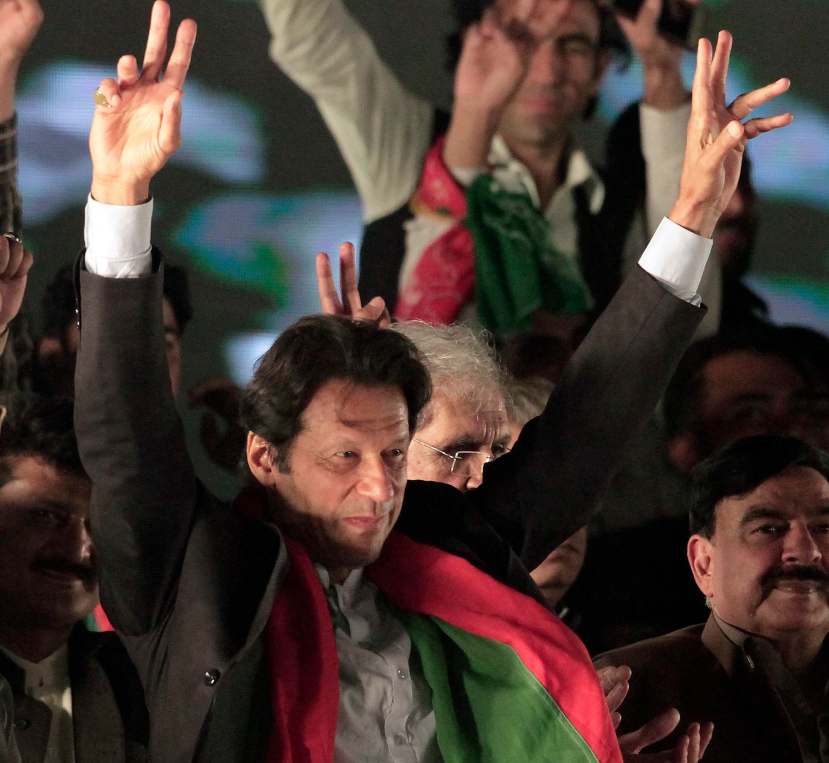 This is the 1st installment in the ‘Bullets & Ballots’ series, which is an LSPR-Legally Flawed joint initiative, aimed at analysing the Pakistan General Elections.

Democracy was supposedly restored to the Islamic ‘Republic’ of Pakistan in 2008 when General Pervez Musharaf stepped down from the Presidency. His resignation marked the end of a decade of military dictatorship. But the last decade has proved that the democratic model, at least in its current form, is not workable in Pakistan. The number of persons missing is on the rise, and the media is being muzzled more than it was under Musharaf. There is no doubt that the army has a major role to play in the actions that have led to this state of affairs. Instead of ruling the country overtly by claiming the Presidency, the army has chosen to retain implicit but effective control by using a combination of intimidation tactics and political influence.

After 2008, the army promised to implement a policy called ‘return to the barracks’. But clearly, this was little more than a facade for entrenching military influence into the political arena. In addition to exercising influence from behind the scenes, the army still retains a huge amount of real control. Foreign and defence policy, in addition to full control of Pakistan’s substantial nuclear arsenal has remained in the hands of the military.

Pervasive influence of the Army

Nawaz Sharif recently remarked, “There was a time when we used to say (the army is) a state within a state. Now it’s a state above the state.” The dominance of the army can be understood with reference to the sharp urban-rural divide in Pakistan.

In the urbanised cities and surrounding areas, the army retains control by exercising direct influence over political leaders, and by suppressing media agencies. In terms of direct pecuniary interests in urban areas, the army runs a sprawling business empire that covers sectors like banking, investment, education, and real estate. This portfolio, which is used by military officials as a retirement fund of sorts, has been estimated to be as high as $10 billion.  To ensure the sustained security of these business interests, the army has a vested interest in retaining political control in the urban areas of Pakistan.

As far as the rural areas are concerned, it is no secret that villagers do not weigh ideologies and electoral claims before casting their vote. They vote as their feudal lords direct them to. These landowners, who are essentially power brokers, back the party that will advance their interests. In a recent article titled ‘Where Democracy is a Terrifying Business’, published on the New York Times, Ali Akbar Natiq has asserted that the military is the ‘biggest feudal lord and landowner’ in the villages. A huge number of farmers work as sharecroppers on land owned by the military, and their vote is entirely decided by the Generals. Moreover, soldiers have been known to confiscate ballot boxes in rural electorates to subvert the counting process altogether.

In order to maintain its privileged position, the army has been known to engender and sustain conflict both within Pakistan by allegedly sponsoring militant groups,  and in neighbouring states like India, by maintaining a permanent military confrontation. It is no surprise, therefore, that the army unseats democratically elected leaders who attempt to oppose the army’s hegemony. In a bloodless military coup in 1999, General Pervez Musharaf seized control of the government from the democratically elected Prime Minister Nawaz Sharif, who at the time, was on the verge of relieving Musharaf of his command. Last year, Sharif was removed from office for the second time again due to corruption charges. But as has been explained subsequently, it is widely accepted that this removal was engineered by the army. This was deemed necessary as Sharif had become extremely outspoken against the military’s toxic influence on Pakistan’s polity.

It is clear that the army wants a Prime Minister who is more compliant, and will either actively support the military, or at the very least, follow a policy of deference and non-interference. While it is unclear which of these policies Imran Khan will follow, there is no doubt that as far as the military establishment is concerned, Mr. Khan is the chosen one.

In the previous general election held in 2002, Imran Khan’s Tehreek-e-Insaf (PTI) managed to win only one seat in Parliament: Mr. Khan’s own. When compared to the 115 seats that the PTI has just won, which makes it the single largest party, the difference is stark. In addition to the wave of popularity that Mr. Khan’s anti-corruption/pro-stability rhetoric has managed to garner, the army has clearly played a major role in his victory.

1. Brushing Aside Nawaz Sharif – After having lost the election to Nawaz Sharif’s Pakistan Muslim League – Nawaz (PML-N) in 2013, Imran Khan had slowly but surely positioned himself as the favourite for the 2018 race. Sharif was removed from his post last year over allegations of corruption by the Supreme Court, under immense pressure from the military. More recently, he was sentenced to 10 years of imprisonment on corruption charges (specifically owning assets disproportionate to his income). Pressure from the army would not have mattered had the charges been true. But in March, when Geo (Pakistan’s biggest news channel), based on a meticulous investigation, claimed that the grounds for Sharif’s convictions were extremely flimsy, its cable distribution was immediately terminated. In addition to indicating the army’s blatant disregard for free speech, this action makes it clear that Mr. Sharif’s conviction and subsequent arrest were engineered by the army. For good measure, his daughter Maryam Sharif has also been sentenced to seven years on similar charges.

2. Roping in the ‘Electables’ – In addition to preventing some candidates from contesting, PTI has successfully persuaded a substantial number of PML-N lawmakers to alter their allegiance. These ‘electables’ (as Khan calls them) are mostly political stalwarts in Pakistan, and with their shift to PTI they not only bring in years of experience, but also their sizeable voter base. In fact, the Economist has reported that around a third of the PTI’s candidates are new entrants from other parties. Notably, Mr. Khan has not been too particular about the kind of candidates he has picked. Not too long ago, these very individuals were the subject of Mr. Khan’s criticisms for being corrupt and inefficient.

Two alternative theories can explain this sudden shift of candidates. The first is that after having ignored Imran Khan for the past two decades, the political elite of Pakistan have finally decided to back him. This theory is not entirely baseless, as PTI’s anti-corruption platform has undeniably resounded among well-educated Pakistanis. But the more plausible theory, and one that has been echoed by several PML-N politicians in the run-up to the elections, is that Inter-Services Intelligence (ISI), which is an army-dominated agency, has coerced these politicians to defect and join PTI.

3. Curbing campaigns of other parties – Candidates from other parties have been effectively silenced by the Police or the Justice system, both of which are in the implicit control of the armed forces. In fact, around 17,000 PML-N activists have been charged with breaking unspecified election rules. In a press statement issued on July 16, the Human Rights Commission of Pakistan (HRCP) reaffirmed ‘the public perception that all parties have not been given equal freedom to run their election campaigns’. The HRCP has reported that candidates from PML-N, PPP, and Awami Workers Party were harassed by ‘security personnel’ on the campaign trail. Their movement was not only monitored, but also restricted, and their election banners were ‘removed en masse’.

4. Muzzling the media – In the HRCP report, Dr. Mehdi Hasan expressed grave concerns over the media censorship that has been a hallmark of this election. Journalists perceived to be in favour of PML-N or PPP have been intimidated, harassed, and in some extreme cases, even abducted. Distribution of Dawn and The News was curbed in cantonments, and as has been mentioned before, Geo TV’s cable distribution was temporarily terminated. According to Dr. Hasan: ‘such pressures on the media serve to manipulate public opinion, forestall critical debate and leave powerful institutions unaccountable to the public.’

5. Direct control over polling & counting – The Pakistani army deployed over 3,71,000 soldiers for the election. Each of the 85,000 polling stations across the country was manned by army personnel, and it has been reported that in most cases, electoral officials were sidelined. In fact, military personnel were even assigned magistrate’s powers within the polling premises.  Further, despite possessing adequate accreditation and permits, many media workers were denied entry into the polling stations. The army’s micromanagement of the elections send a clear message to politicians and voters alike: the line between civilian and military responsibilities has been blurred, and the army will continue to intervene in processes with purely civilian mandates.

While the army has maintained that it played no direct role in the electoral process, and that it only deployed personnel to maintain the sanctity of the ballot process, opponents have alleged that the army has directly intervened in the counting. In fact, at least six political parties have alleged that their representatives were not allowed to witness the counting, which is in clear violation of the law. Based on reports made by FAFEN, which is an independent Pakistani election observer network, Al Jazeera has reported that in at least 35 constituencies, the winning margin was lesser than the total number of votes deemed invalid by the electoral officials. This metric usually indicates manipulation, but it was not looked into by the Election Commission of Pakistan, which is vociferously defending the results. The PML-N rejected the results, alleging ‘blatant rigging’, and vowed to mount a legal challenge. But it is yet to emerge with a clear plan of action. The PPP seems to have accepted the results for now.

As the Pakistan cricket team’s finest captain steps out to lead his country once more, the world, and especially India, will watch keenly. The grass on this field will be uneven, and the pitch will be tougher to play on. In 1992, he had led his country to victory in the World Cup, and had charmed the world with his charisma and leadership. It remains to be seen whether he can replicate the same feat. If the election is anything to go by, however, then it is doubtful whether Mr. Khan will be anything more than a mere facade, while the army sits back and runs the country.